A rushed-out-in-20-minutes poem by jack baker

My Happiness Essay
Happiness to me is some things in life, For example; Spending time with my family connecting with some people at the library, and visiting relatives. Here are those things in detail.
Happiness to me is family time, We watch movies, Play games with dice, and we like to go outside on summer break. Things like these makes me happy because they are socially good for me and everyone else, I have fun doing so, and it brings us closer as a family too.
During the summer, I like to go to the library and play games there. (Because my mom wont let me stay inside the entire day.) there's a whole bunch of other kids there too.
Time moves quickly when I start playing games, and I don't have a clue what time it is when I decide to take a break from video games. Usually I just keep playing until someone says; “Hey we need your help with the dishes” Or something like that. It also goes by fast when Im not paying attention in class, that way the sooner I get out of it.
About a year ago, I flew over to my grandma’s house over in denver and it took about three flights to get there. I had also went to disney world to see my grandpa, Those kinds of things make me happy because I rarely get to see them so I savor the moments with them.
To Summarize this essay into one short sentence: I like spending my time playing games by myself and with the community, spending time with my family, and visiting relatives.

Artist statement
In the picture: I am in the middle of the picture. To the left of me is a board game next to a family and to the right of me shows a video game and a TV. I am outside in the picture to represent me going out to see my relatives
​My Happiness Picture 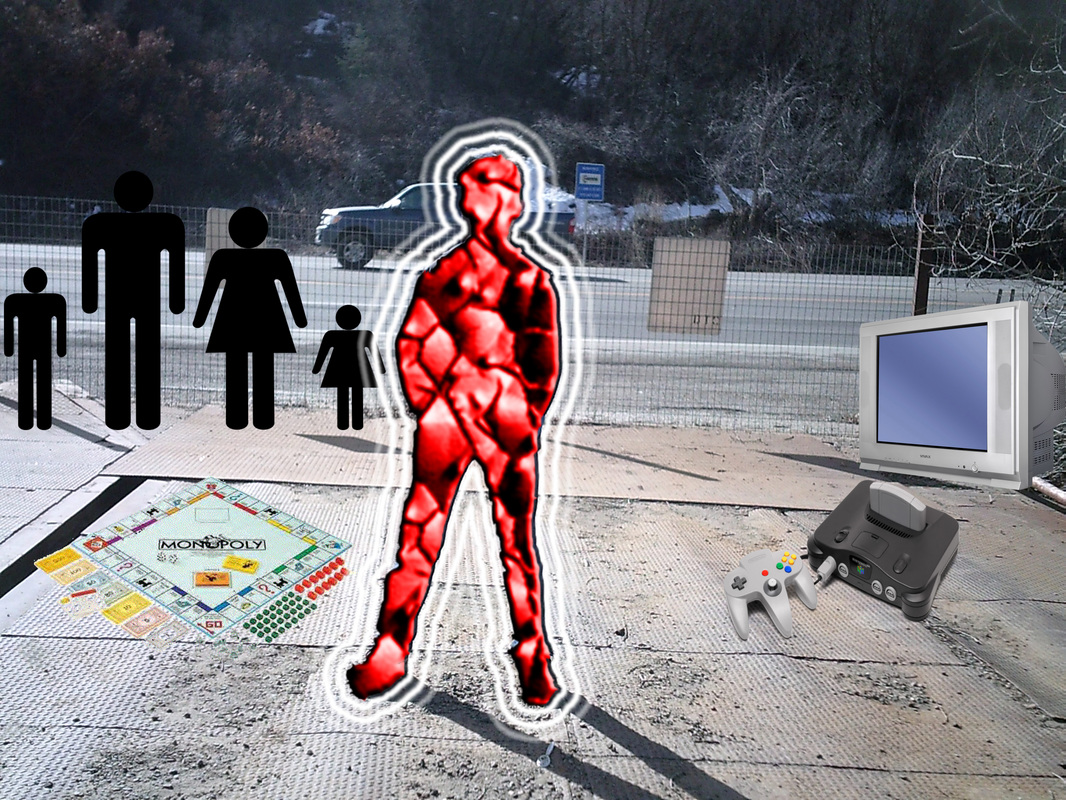 Here is my exhibition speech for the 27th of January 2016
﻿    Why italy thinks that palestinians should not return to israel. Mostly because the fact that they have been let back into the country for an attempt to make peace with the israelis, but the , palestinians did the exact opposite and killed many. Israel has done that twice now, and that being said they can't be trusted anymore. If we keep the borders where they are, or give the palestinians a tiny bit more land than what they have right now. The palestinian refugees can move back to the new palestinian land if the want to, but if the choose to remain in israel, they can do so, but will be searched for any weapons that pose a threat to israel. They can keep them if they go through with a background check.
​﻿Here is my Essay I did on Games, Genders And About Me ( ͡° ͜ʖ ͡°)
Jack Baker
Humanities, 5th and 6th period. Sara Price

When you look at a video game, you mostly imagine a boy playing it instead of a girl. Because the media and the game genres target boys mostly cause the male gender buys over 50% of games today (about 56%).
When you hear the term “Shooter” the first gender you think of is the male gender, Why? Because our society has been socialized to believe boys are “supposed” to like violent video games, and girls are “supposed” to like their frilly, pretty, and non-violent games. There is a double standard in the games genders choose to play though. In the world of gaming It's okay if a girl plays a shooter game, but if a boy played a girl game, he would be judged.  These forced gender bias only get worse as game designers continue marketing specific games for specific genders. For Example: A girl can have a blue ball and a pink ball, A boy can only have a blue ball (if he doesn't want to be judged.) because that is what they are assigned to, girls have more freedom than boys if you take it into context. But girls these days have gotten into video games like the boys, In an article by Statista “ever since 2006 the gender split of gamers the amount of girls percentage has went up 6%! Now 44% of girls play videogames.” If girls can play both boys and girl games, then they would obviously try and kill 2 birds with one stone, making a game targeted for boys.
Random people making girl games are spending less than a month making a girl flash game, but large groups of people spending years pouring their work into games for boys and are most definitely more successful. because like I said the main target is aimed for boys to play it, because girls are not judged for playing these kinds of violent games. It’s a little unfair but it’s (Probably) what our society wants us to be.
In conclusion, Girls have more freedom from being judged than boys because girls can have anything a boy could have and no one would care but boys can’t have anything a girl would have, and I am a very weird cat. So yeah.