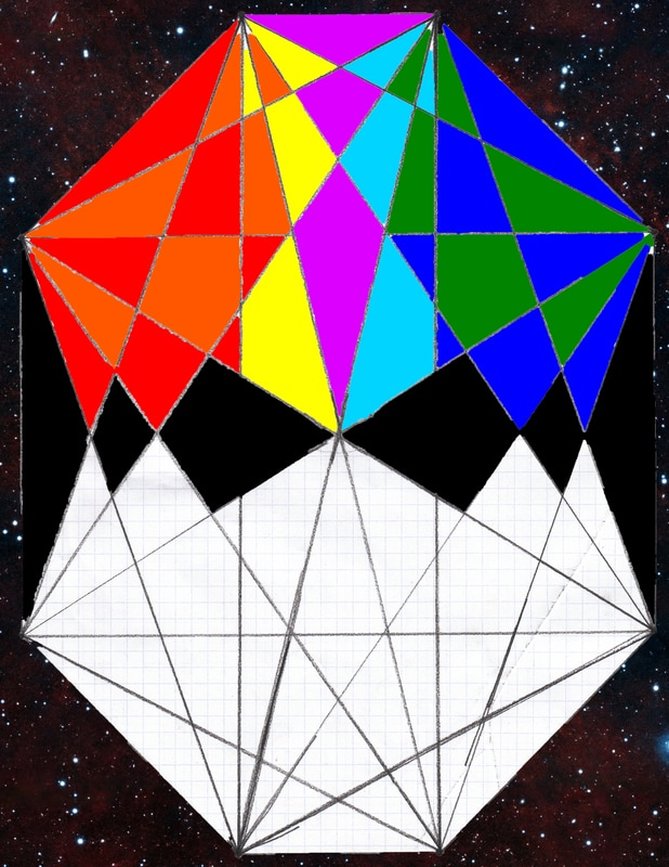 ​This picture that I made represents the  chromatism conflict in the novel/movie: Flatland. In Flatland ther is two contries, one with all the shapes that paint themselves different colors, and one that does not. There is a border dividing the two, the chromatist nation paints themselves different colors becuase it would be easier to determine the shape of someone. But the normal nation does not paint themselves because it would be easier to getaway with murder. For instance; Circles could be painted red and triangles could be painted blue. A triangle could paint himself red and if a circle were to see that they would think that the triangle was a circle and the triangle could potentially get away with murder by killing the circle and then changing back to its specified color.


​
My Artifact #6 Poem
That one fateful day I forgot to order lunch. To show,
I will tell you a tale of my greatest woe.

I started off a good day, rather great day at that,
There I was, 9:30 past ordering time, I sat down at the chair I sat.

I was not conscious when the time passed by as I neglected to order my lunch
I do regret not paying attention to time a bunch.

As the clock struck twelve, Lunch time!
I had realized that I had made a mistake when I moved to the lunch line.

“Oh no! Oh no! What have I done??”
I was hungry for meat and condiments on a bun.

My mother called the front desk who would help me get something to eat.
Some GoldFish as two things from an old vending machine.

My mother gave me a number of my Father’s place of office,
I needed food, I was on very thin ice.

“Yeah! Sure… I’ll pick you up some food but what do you want?”
This was an indeed a difficult question indeed, after some time I had decided what I wanted.

“Yeah, just uhh.. Pick me up some mcdonalds or something… should we meet somewhere?”
“How about the front of the building? McDonalds? Ok! Be right there.”

As I waited, my stomach growling loudly like a bear,
I knew after I was done, there would be nothing else to share.

As I waited, My teacher gave me a survey, “What would you become when you grow up?”
“Controlling your future since 1987!” I said, I was a joke I that I made up.

Atlast, I final call came from my Father, “Where are ya?” “I’ll be right there!” I said.
Finally! My hunger for food was becoming too much to bare.

He handed me a warm box that was labeled “Quarter Pounder W/ No Slivered Onions”
This was what I had been waiting for. Better even I had asked for no onions.

Finally as I finished my meal. I had been waiting for. For meat and condiments on a bun.

In the book, Flight by Sherman Alexie, the author uses mood to change the feeling of the book. At different times, he makes the story suspenseful, calm, and intriguing by stating and describing the environments before an event.

When Zits is the Civil War scout, Augustus, he is running away from an army and he trips over a fallen branch and feels incredible pain. “Behind us, Death. And so we run. And then I trip over a fallen branch and fall beside it. My back seizes up again. I curl. And I scream.” (Pg. 104) This mood is called suspense, It interests the reader to keep reading to find out what happens next. A suspenseful mood is effective because it is tense, and the reader can’t help but wonder what is next. Alexie used suspense to great effect because I was desperate to know what would happen to Zits next. Alexie kept me wondering what body Zits would inhabit next, and what time period.

The mood sometimes changes from very suspenseful to very calm. For example, on page 106, Augustus sees an army coming after him, “I hear screaming. I realize it is me screaming. I hear weeping. I realize it is me weeping. I close my eyes.” Then, at the start of the next chapter, Zits is suddenly in the body of a pilot named Jimmy who is alone in a quiet airplane flying thousands of feet above the ground. This calm mood, reflected in the serenity of the sky surrounding Jimmy, makes us feel that everything is okay, and that Jimmy’s life is good. Which is funny and ironic, because everything is NOT okay with Jimmy. He’s having an affair with a young woman who he doesn’t love, and his wife throws all of his things out on the lawn in front of their house when she catches Jimmy and the girl together.

In conclusion, we can see how Sherman Alexie uses mood to drastically change how the reader goes through Zits’ journey in the novel, Flight. The author used suspense, calm, and intrigue to change the feeling of the book.