Biology Movie
Biology movie Reflection
1a. The purpose of the project was to make a biology movie. Tina wanted us to understand the basic concepts of filming and DNA.
1b. I met the purpose to a slightly higher extent by working on the weekends and all through the week on editing. It wasn’t hard, but I needed to do it anyway because there was barely any time in between then and the all-school exhibition and the reason behind that is because I was only finished with scenes 1-3.
1c. The class met the purpose to a higher extent by working nonstop to get the filming done faster than anticipated.

2a. I did personally well on the project by doing unique editing to a point where I would work when I had time off from school. I learned that I find film editing a lot of fun, and that I enjoy doing it. I was happy to spend time at home working on the project, and I think that I did a really good job.
2b. The whole class did well by never taking a real break except for when we worked on the math/humanities project.

3a. I experienced a challenge that the movie didn’t really include good audio, The personal challenge here was making the music loud enough for the audience to notice, but not to where they can’t hear the voices. At the time, the voices were extremely loud, and so I had to turn the volume up on the music a lot, but it wasn’t just the voices. It was also the background noise with the outside shots. Plenty of cars and trucks can be clearly heard in almost all of the outside shots and some are loud enough to drown out the music and voices.
3b. The challenges we faced as a class was the fact that we needed cameras and we had very limited options for the start as we were scrambling around trying to get props and functional tools for filming this movie. We also struggled with scheduling. We wanted upperclassmen to be in the film, and that meant that we could only film at very certain times.
3c. In the future, these challenges could be better handled because we’d have more experience. A lot of our struggles came from not knowing what we’d need or when we’d need it, and that was really difficult to deal with. Experience always helps.
3d. Collaboration looked like two working groups coming together with ideas about what was needed for the background parts (filming, editing, props) and the front parts (storyboarding, acting) so that the groups could talk and compromise and help to move forward.
3e. I collaborated by listening in during the process of what was happening, keeping tabs on the creative ideas that were driving the film, and then using that information to make good decisions on what scenes to keep, what scenes to get rid of, and how to put the whole thing together. I collaborated by listening and paying attention.

4a. I wouldn’t change much, except that I might help out more when there wasn’t anything for me to do in the editing. There was a lot of downtime, and then a lot of high-energy effort.
4b. I think I might pay more attention to the details of filming. The audio has caused me a lot of problems, and those could have been avoided if I’d done a better job of keeping tabs on what was happening.
4c. I would like the same job, and I would also keep the same team- I really enjoyed working with them. ​
Infographic Reflection
1a) One idea that I learned about is that bats are prone to White Nose Syndrome. The fungus that gets on the bat during hibernation which then damages the bat with a lot of different effects.

2a)the most significant thing that I did was to create an infographic. I contributed to the project by helping Claire with Photoshop editing. The project wasn't a success because the infographic was not in the exhibition. However, we did get a grade so I guess thats something.

2b) The difficulties I experienced were time management. When I set my mind to it, I got the infographic done in a day. But, I wasted a lot of time before that.

2c) I knew that everyone in the group would get something done eventually, but I was worried about maybe not getting things done at all.

2d) Before this project, I did not know what effects White Nose Syndrome has on brown bats. I thought it was just a disease that bats get.

2e) I might do it a bit earlier so that my project might actually be shown at the exhibition.

3a) I may use infographics in the future for other classes. Also, I might be able to tell people I meet about White Nose Syndrome.

3c) I got to do Photoshop, which was nice. That meshes with my learning style because I got to manipulate graphic elements. I like to research as well.

3d) In the future, I would maybe think about better time management. Maybe I might get a job that uses Venngage.
My White Nose Syndrome Infographic 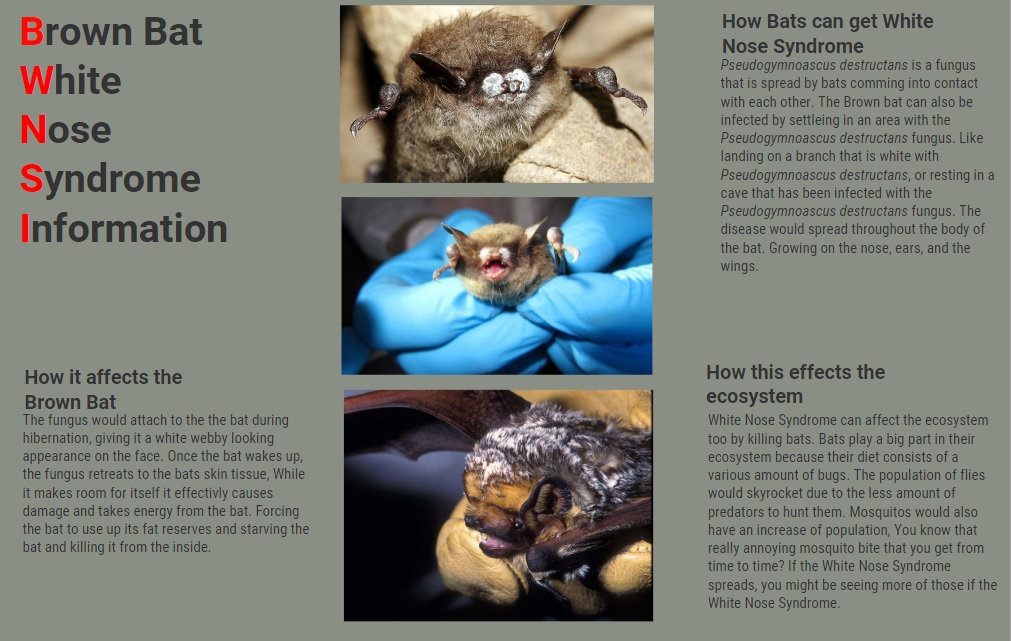